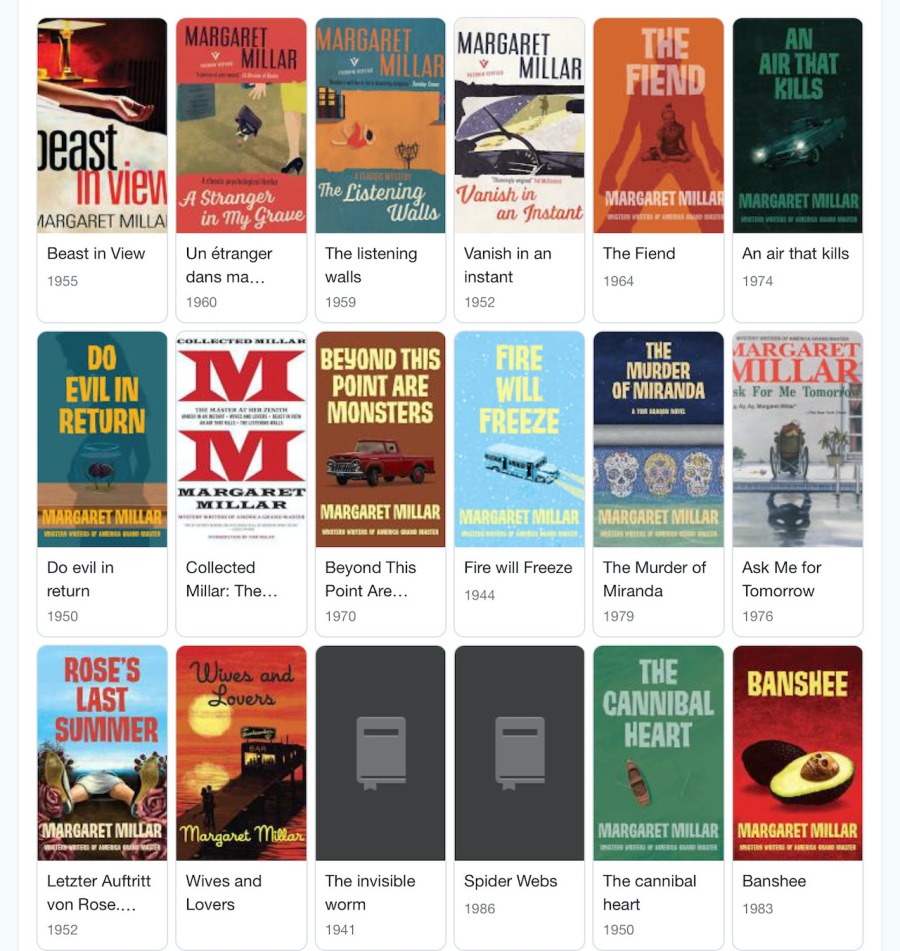 Millar wrote four non-mystery novels beginning with Experiment in Springtime (1947), a critique of a post-war family. The story features a wife who is miserably married to a man who is psychotically paranoid about her fidelity.

Millar returned to crime fiction with Beast in View, a psychological thriller about spinster Miss Clarvee later adapted for a television episode for Alfred Hitchcock Hour. The novel also won the Edgar Award in 1956. Following the Edgar win, Millar served as president of the Mystery Writers of America 1957-58. In 1982 she was named a Grand Master by the Mystery Writers of America and also received a Derrick Murdoch Award in 1986, a special achievement award for contributions to the crime genre.

Millar, a passionate bird watcher, was active in the Californian conservation movement in the 1960s. Her observations on wildlife near her home were collected in The Birds and the Beasts Were There (1968). She was named a Woman of the Year by the Los Angeles Times in 1965 for her service in organisations like the National Audubon Society and the Sierra Club. The same year The Fiend was nominated for but did not win a second Edgar. In this creepy, dark novel, a nine year old hungers for affection from her divorced, man-hating, self-pitying mother.

Millar’s personal life included a tumultuous marriage to fellow mystery author Ken Millar who went by the pen name Ross Macdonald. They had a daughter Linda whose life was tragically short. Linda killed a pedestrian in a drink driving hit and run incident when she was sixteen and was plagued by mental health issues before dying in her sleep of an embolism at age thirty-one.

Margaret Millar did not publish any work for six years following her daughters death in 1970. Her next novel Ask for Me Tomorrow (1976) was about a Hispanic lawyer called Tom Aragon on the trial of a wealthy women’s missing first husband, who disappeared with a Mexican girl.

Over her lifetime the prolific author produced more than 25 psychological mystery novels. She died at her home in Santa Barbara aged 79.

Photos from the web