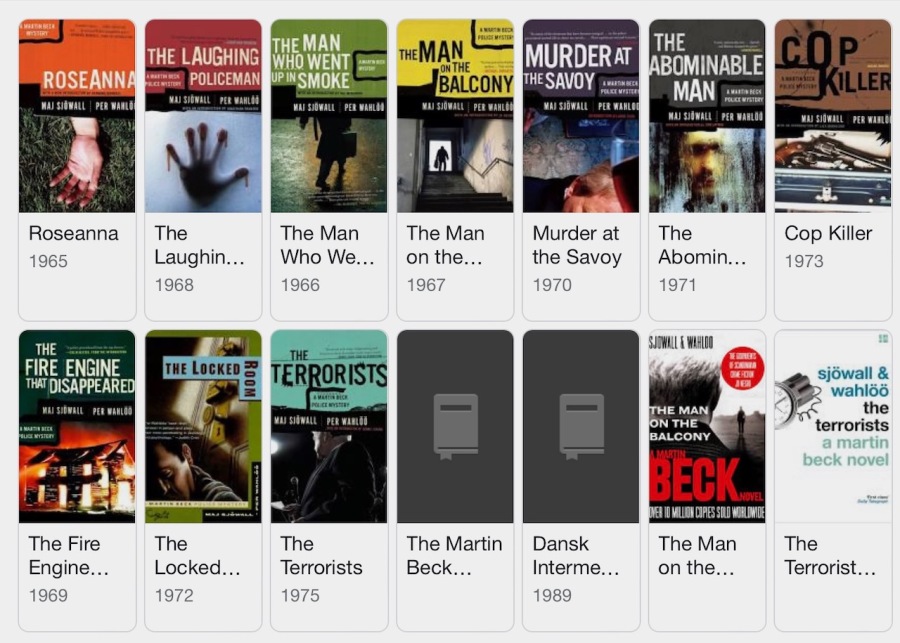 Maj Sjöwall was widely regarded as the godmother of modern Nordic Noir, or Scandi crime as it is also known. She co-authored 10 police procedurals featuring dour, middle aged Martin Beck with her third partner, Per Wahlöö whom she met whilst both worked as magazine journalists in 1962. Their influence can be seen in subsequent Scani noir such as Stieg Larsson’s The Girl With the Dragon Tattoo and Jo Nesbo’s Blake mystery The Man on the Balcony.

“that you have three of the most important virtues a policeman can have,” he thought. “You are stubborn and logical, and completely calm.”

The two conceived a project to write a series of ten books together, each writing alternate chapters in the evenings after work. The first book, Roseanna about the strangling death of a young tourist, was published in 1965. Their pared back, terse, fast-moving style of detective story was fresh and new and received rave reviews when they started to be published in translation in 1968.

January 7 arrived and looked like January 7. The streets were full of gray, frozen people without money.

The Laughing Policeman won the Edward Award in 1971 for best mystery novel and was made into a film in 1973. The tenth and final novel The Terrorists was published in 1975 shortly before Wahlöö died. The entire work can be read as a Marxist critique of the failings of Swedish society and is meticulously researched to include authentic details.

Recently—no; for as long as I can remember, large and powerful nations within the capitalist bloc have been ruled by people who according to accepted legal norms are simply criminals, who from a lust for power and financial gain have led their peoples into an abyss of egoism, self-indulgence and a view of life based entirely on materialism and ruthlessness toward their fellow human beings. Only in very few cases are such politicians punished, but the punishments are token and the guilty persons’ successors are guided by the same motives.

Sjöwall was born 25th September 1935 in Stockholm and grew up in one of the hotels manager by her father, complete with round the clock room service. She was a single mother at twenty-one, then married and divorced two older men before meeting Wahlöö, a left-wing journalist and novelist. The two fell in love over crime fiction. They were together thirteen years until Wahlöö’s death in 1975. After Wahlöö’s death Sjöwall returned to a bohemian life writing for magazines and co-authoring a number of books and translating the American crime novels of Robert B Parker into Swedish. She died in April 2020.