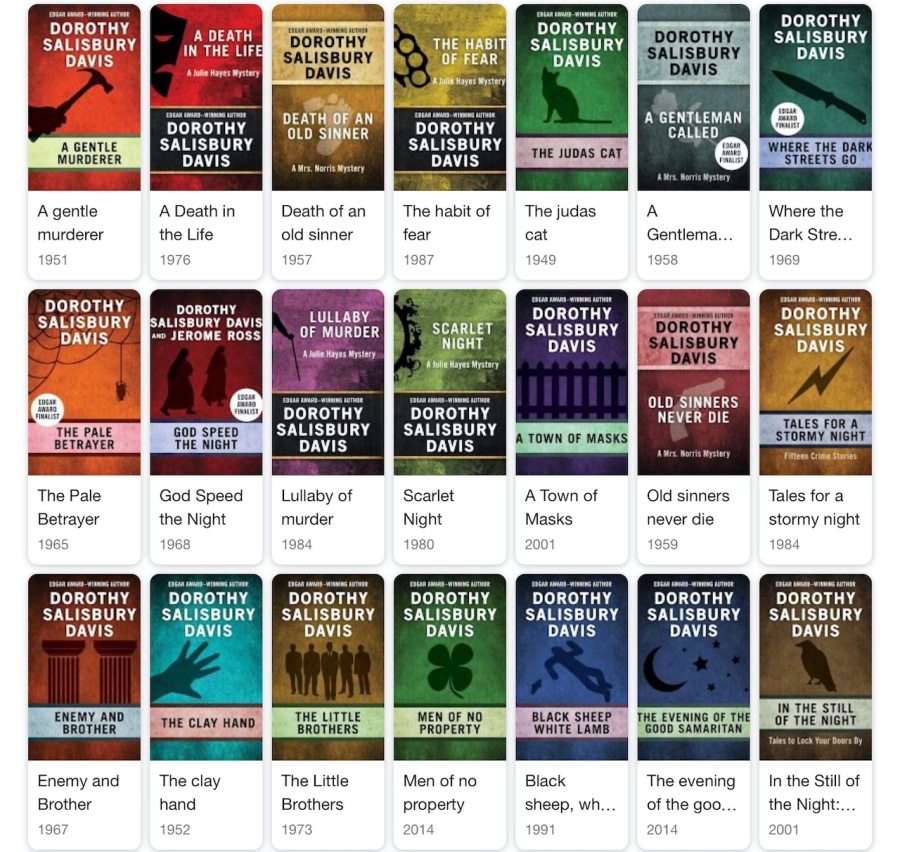 This post continues my Grand Dames of Crime series exploring some of the best women crime writers from history.

American mystery writer Dorothy Salisbury Davis (1916-2014) was born in Chicago and adopted out to a tenant dairy farmer and his Irish immigrant wife. Davis grew up in Illinois and Wisconsin, only finding out she was adopted in adulthood. She studied English and History, graduated in 1938 in the middle of the Great Depression and secured a job as a magician’s assistant, an experience that emerged in her novels which often included a seedy magician. Eventually she moved on from magic after finding a job in public relations and become a magazine editor. She married character actor Harry Davis (The Fortune Cookie, America America) in 1946 and they moved to New York where she began to write.

We reveal more of ourselves in the lies we tell than we do when we try to tell the truth.

A Death in the Life

Her first novel, the Judas Cat was published in 1949. The story opens with the mysterious death of a recluse in a small town, his bloody demise witnessed only by his cat. Davis often murdered people and animals in the first pages of her books, but her tautly crafted stories generally contained little violence otherwise, though they were not cosy mysteries. The author relied on plots driven by psychological suspense and portrayed complex characters and strong women.

Flattery makes fools of the best of us

A Death in the Life

A Gentle Murderer, Davis’s third novel published in 1951 was selected to be included in the Haycraft-Queen Cornerstones of Crime as one the 125 best mysteries ever written. She was nominated eight times for the renowned Edgar Award for best novel, and served as the president of the Mystery Writers of America in 1956. In 1985 Davis was awarded the Mystery Writers of America Grand Master award for her body of work, and was one of the founding members of Sisters in Crime along with Sara Paretsky in 1987, an organisation dedicated to supporting women who write crime fiction. In 1989, she earned the Lifetime Achievement Award at Bouchercon, and in 1994, Malice Domestic named her their Guest of Honor.

Davis wrote twenty novels and more than thirty short stories during her five decade career. Apart from the Mrs Norris series (three books) and the Julie Hayes mysteries (four books), Davis novels were stand alone, which along with her mysteries containing little violence made her unusual in the world of crime fiction. Most of her work was in the mystery genre, though she also wrote a number of historical fiction novels including Men of No Property (1956), set in Ireland during the potato famine, The Evening of the Good Samaritan (1962) set during and after the Second World War, and God Speed Night (1968), a suspense about Nazi resistance during the second world war.

Beware of feelings, Father. They are the biggest liars in us. They make truth what we want it to be.

Where the Dark Streets Go

After her husband Harry died in 1993, Davis stopped writing novels but continued to produce short stories. The last one titled Emily was written when she was 91 for the 2009 Mystery Writers of America anthology to celebrate the 200th anniversary of the birth of Edgar Allan Poe. In 2013, the year before her death, Open Road Media reprinted twenty two of her novels including her most commercially successful novel A Gentle Murderer, first published in 1951 about the psychological disintegration of the young murderer of women. Davis died in 2014 aged 98.