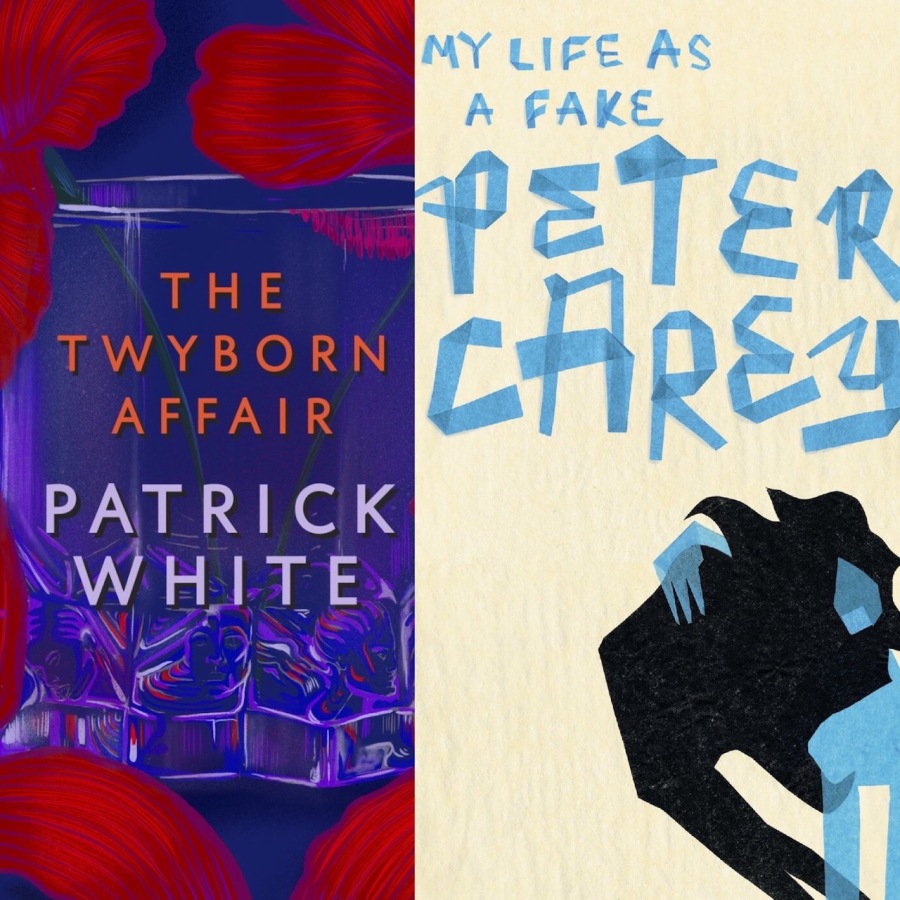 I was captured by the style and writing rhythm of two audio books I listened recently, even more so than their stories. Both The Twyborn Affair by Patrick White published in 1979, and My Life as a Fake by Peter Carey published in 2003 explore identity. In each the authors distinctive styles paint rich pictures of their characters and they were beautiful to listen to.

The Twyborn Affair is written in three parts. One set in a villa on the French Riviera pre-world war one, the second on a sheep station near the Snowy Mountains in the inter-war period, and the third in London just before the second world war. The title of the novel, also the core characters name, provides a clue to the novels story – Twyborn meaning twice-born, and Affair eluding to the characters various love affairs. The story charts the transmigration of a soul throughout three different identities – Eudoxia, Eddie and Eadith – a man bookended by two women. It explores transvestism, split personality and the loss of identity through death and re-birth. It places the anxiety and uncertainty of the human condition under a microscope, expunged of the dichotomy of gender.

It was still impossible for the watcher to decide whether the hair, illuminated by sudden slicks of light, was that of a folle Anglaise or pédéraste romantique, but in whatever form, the swimmer was making for the open sea, thrashing from side to side with strong, sure, professional strokes. It must be a man, Monsieur Pelletier decided, and yet there was a certain poetry of movement, a softness of light surrounding the swimmer, that seduced him into concluding it could only be a woman.

White’s writing style is dense, vivid and beautifully poetic to read. He applies a rhythmic lyricism and elaborate imagery drawing on myth, symbolism and allegory to explore ambiguity, identity, isolation and the search for meaning.

Yet whatever form she took, or whatever the illusion temporarily possessing her, the reality of love, which is the core of reality itself, had eluded her and perhaps always would.”

My Life as a Fake is set in 1972. An editor of an English poetry magazine goes on a junket to Kuala Lumpur and comes across a white man in a bicycle repair shop with ulcers on his legs. He is reading Rilke. The editor discovers that at the end of world war two this man was responsible for a great Australian literary hoax.

Remember, this is the country of the duck-billed platypus. When you are cut off from the rest of the world, things are bound to develop in interesting ways.

Carey toys with mythology in this novel inspired by a true story – the Ern Malley Affair. It explores identity, authenticity and the cultural anxieties of colonial societies. The Ern Malley Affair was a literary hoax involving the publication of poems dashed off as a joke to show that meaningless balony could get taken seriously by the avant-garde. The poems were subsequently published to great acclaim in the Autumn 1944 issue of Angry Penguins. The publication resulted in the humiliation and prosecution of Max Harris, the editor and a champion of modernist poetry, for publishing ‘indecent matter’. Carey draws on original source material but swaps out identities and names of the protagonists and adds in some wholly fictional characters.

I went to bed with the disconcerting knowledge that almost everything I had assumed about my life was incorrect, that I had been baptised in blood and raised on secrets and misconstructions which had, obviously, made me who I was.

Carey plays with Malaysian English slang and the work overflows with literary references including Frankenstein, Milton and WH Auden amongst others. There is a truly distinct use of narrative voice in My Life as a Fake from the crisp upper-class intellectual prose of Sarah, to Slater’s British bluff and effrontery, Chubbs defensive punctuated mash up of Australian and Malay, an aggressive Chinese-Malaysian woman with fractured English, and the elaborate deference of Mulaha. In the written text, one characters dialogue blends into another and folds into the narrative without the benefit of quotation marks.

He is right, he said quietly. The hoax misfired. I wished to make a point, but only to a few. Who cares about poetry? Fifty people in Australia? Ten with minds you might respect. Once Weiss had declared my fake was a work of genius, I wished those ten people to know. That was it, Mem. I never wanted the tabloids. Who would expect the Melbourne Argus would ever be interested in poetry. This was not their business, but what a caning-lah, what a public lashing poor old Weiss was given. I could never have foreseen that.

Both White and Carey have distinctive voices, original styles, and make great use of vocabulary and literary techniques, authors worth studying for any writer.