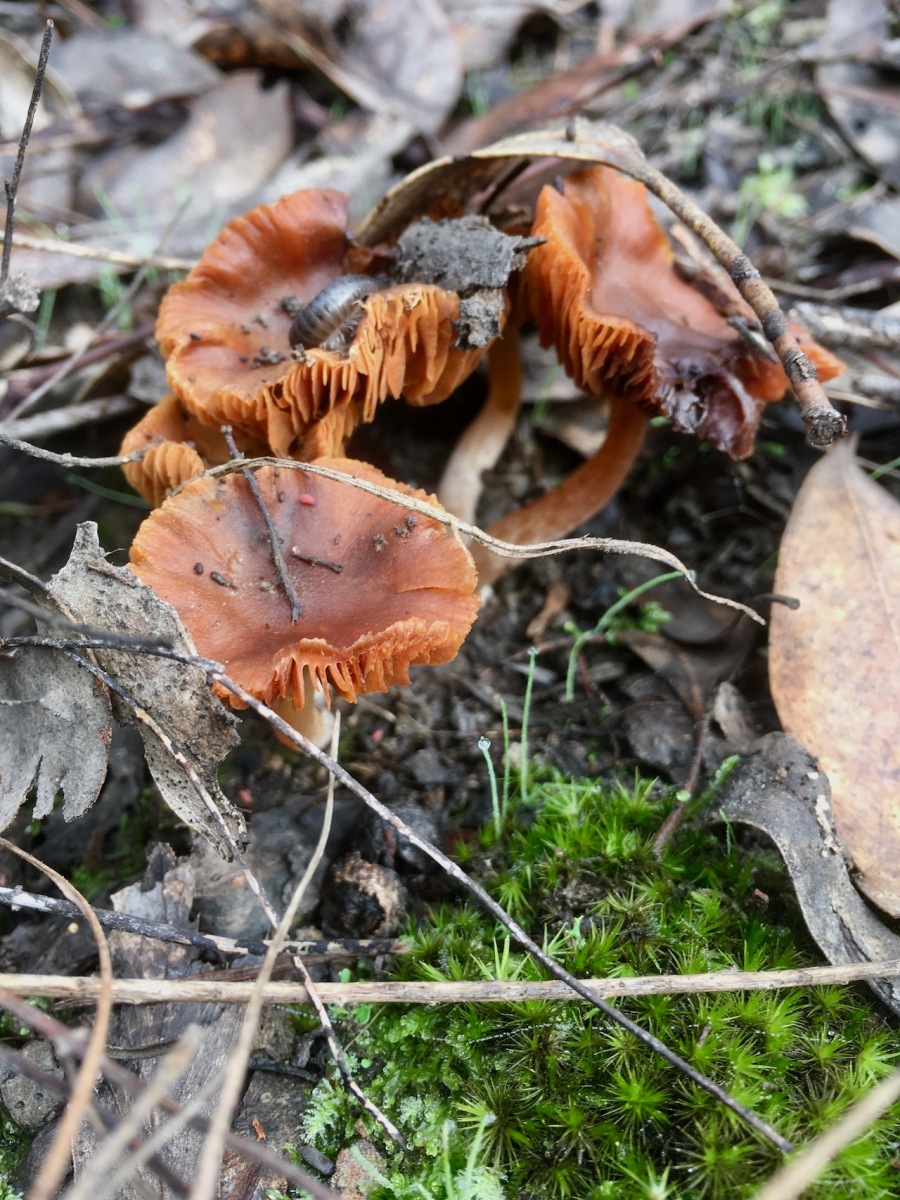 growing through history to create a wedge of green
a contested space, the cities lungs
the forest breathes life and fire
glowing with the bright and blinding light of an Australian summer

Warrandyte’s landscape changes markedly from season to season. On windless days in autumn there is an eerie silence in the parched bushland after a long summer. The baked clay floor is covered in discarded leaves as the days become shorter and the nights become cooler and the land awaits the first signs of rain.

Spider webs strung across the tracks glisten with early morning dew above empty cicada shells and sun-bleached butterfly wings scattered on the ground. When the rain arrives the perfume of eucalyptus permeates the forest and there is a flurry of growth as the plants sigh relief that they survived the summer.

After the rains in late autumn and winter when maidenhair, mosses and lichens cling to damp shady areas under tall gums, a colorful display of fungi and toadstools appear scattered through the damp undergrowth. The fungi emerge on verges and cling to rotting logs and tree trunks. On cold winter mornings when the valleys are cloaked in a swirling mist I sometimes go foraging for the edible species.

The rains that swell the river and fill the dams attract an army frogs. My favorite is the pobblebonk (Limnodynastes dumerrilii) who’s call sounds like a banjo string being plucked. Flame robins and scarlet robins flit around whilst kangaroos graze in open paddocks or laze in the grass taking advantage of sunny days.

When the days start to lengthen, the bushland areas turn golden with the wattles bursting into bloom. Green hood orchids appear from amongst the native grasses, and purple and mauve colored flowers auger the coming of spring.

Spring erupts with early morning bird choruses and the frenzied activity of nesting, mating and raising young fledglings. Reptiles like blue-tongues and snakes start to emerge from their sleepy winter abodes.

Butterflies, bees and other insects take advantage of the bountiful nectar-rich flowers. Sugar gliders hunt the abundant insects while ringtails feast on the new growth of eucalyptus trees. The forest comes alive under the watchful gaze and rhythmic groans of the tawny frogmouth, and the double note of the boobook owl calling.

At this time of year tiny floral beauties burst forth to brighten up the landscapes harsh façade. The bush is ablaze with orange-yellow and red blooms of bush peas, prolific showy white petals of prickly tea-tree, sprays of pink bells and blue pincushions, and the chocolate and vanilla perfume of the chocolate lily. It becomes evident why Warrandyte has, and continues to be such an inspiration to artists.

When summer arrives the brilliance of spring fades and the bush becomes tinder dry. Plants start to set seed, their feathery plumes dispersed by the wind or carried away by insects and birds. The predominantly white Christmas bush and Burgan that flower during summer court butterflies to a background orchestra of cicadas, grasshoppers and crickets.

On warm days skinks and blue-tongues sun themselves on rocks. People flock to the river seeking a quiet corner to cool off, until the gusty north winds send them scurrying from the bush like ants in search of cooler, safer places, away from the threat of bushfire.

Fire has been an integral part of the landscape since the Wurundjeri used it as part of their hunting techniques. Since European settlement numerous fires have swept through the area including one on Black Thursday in 1851 that would have cleared much of the bush in which gold miners were searching for gold, leaving it black and scorched. Parts of Warrandyte were also devastated by fires in 1939, 1962, 1969 and 1991. On most of these occasions the river provided refuge from the smoke and flames for residents who fled there to escape the advancing fronts.

I watched the red orb over Kinglake from my balcony when the Kilmore fires burnt on the evening of 7 February 2009. The heat had been oppressive that day. The wind roared like a high-speed train driving heat from the depths of hell before it. The fire sucked oxygen from the air and ripped tree trunks from the earth. It melted paint from doors and flesh from bones without mercy or discrimination. Many perished that day, but Warrandyte was spared by a wind change that came through earlier than predicted.