Chaucer is credited with the original use of the idiom “All good things must come to an end.” A version of the saying appeared in his poem Troilus and Criseyde written in Middle English in the 1300s. It is a reminder that everything is temporary. And so it was after two weeks at an idyllic spot near Byron Bay we packed up the car and headed south toward home.

Macquarie and Newcastle then head inland and stop in the Southern Highlands and Beechworth. We began our return journey and I began a cold that left me feeling like I was wading through a quagmire of sludge. Perhaps it was a response to returning to the chilly southern state.

The drive from Byron Bay to Port Macquarie and Newcastle revealed the scale and magnificence of the Australian subtropical coastline. I love reading novels set near where I am when in holidays. We listened to My Brilliant Career by Miles Franklin during the drive. The book was published in 1901 and tracks the life of a young headstrong Sybylla Melvyn in rural NSW in the 1890’s.  The novel vividly evokes the Australian landscape and is an extraordinary novel to have been written by a nineteen-year-old.

I must confess I wanted to slap the main character Sybylla. She is mercurial and contrary.  A girl who desires to pursue a big life, she’s ahead of her time and wants to have it all. She refuses to marry a man she loves as she believes it will prevent her having the professional life of a writer that she desires and curtail her independence, 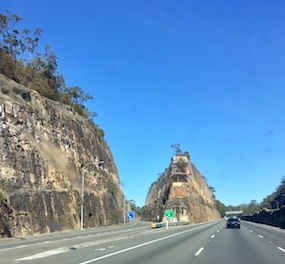 despite his protestations he will support her ambitions. In the end her own decisions leave her with very little of what she wanted. Personally, I think she should have stopped being so down on herself, married Harold and kept him to his word to support her to be a writer.

The subtropics gave way to more temperate forests and the temperature dropped we heard the news that Peter Corris had died, another sad loss to Australian crime fiction. We were supposed to stay at a place in the Southern Highlands on our third night.  The promise was a late 19th century sandstone cottage in beautiful established gardens complete with alfresco courtyard and mountain views.

I hadn’t heard from the accommodation host that day, which is unusual. Hosts commonly send a pre-check in message about access and house rules.  When we arrived, it seemed something wasn’t quite right.   There was a car parked half on, half off the driveway near the house as if it had been abandoned in a hurry.  There was no answer when we knocked at the front door so we walked around the place trying to work out where the accommodation was.  When we looked through the windows we saw half-finished renovations and laundry strewn across the furniture and the floor.  We started to get a creepy feeling about the whole deal and when I couldn’t get hold of our host we decided to stay on the road. 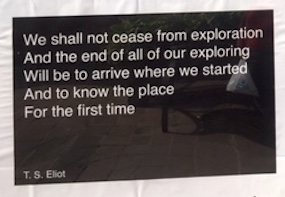 Fortunately the host at our next destination was happy for us to swap our nights around.  We drove 750km from Newcastle to Beechworth that day. As soon as we crossed from NSW to Victoria the temperature dropped and it started to rain. We stayed at Fanny Philips Cottage in the center of Beechworth.  Built in the 1860’s it had been modernized and felt like a welcoming, warm cocoon. We were almost tempted to stay holed up there for another day.

As we left Beechworth we listened to Gun Control by Peter Corris and immersed ourselves in the Sydney underworld of motorcycle gangs, corrupt police and illicit guns.

For some reason I find these type of issues much more engaging and exciting than teenage angst and romance.

Destructo dog was  pleased to see us when we got home and has grown so much the coat that was just a little small when we left now looked like a waist coat.  She got a bit excited at one point and jumped up on me – paws on my shoulders and nose at face height. I hope she stops growing soon.  The garden needs some weeding, but the first signs of spring are here with the almond and nectarine blossoms out. That feeling of good things coming to an end had morphed into something else.  A delight at being home in our own comfy place.