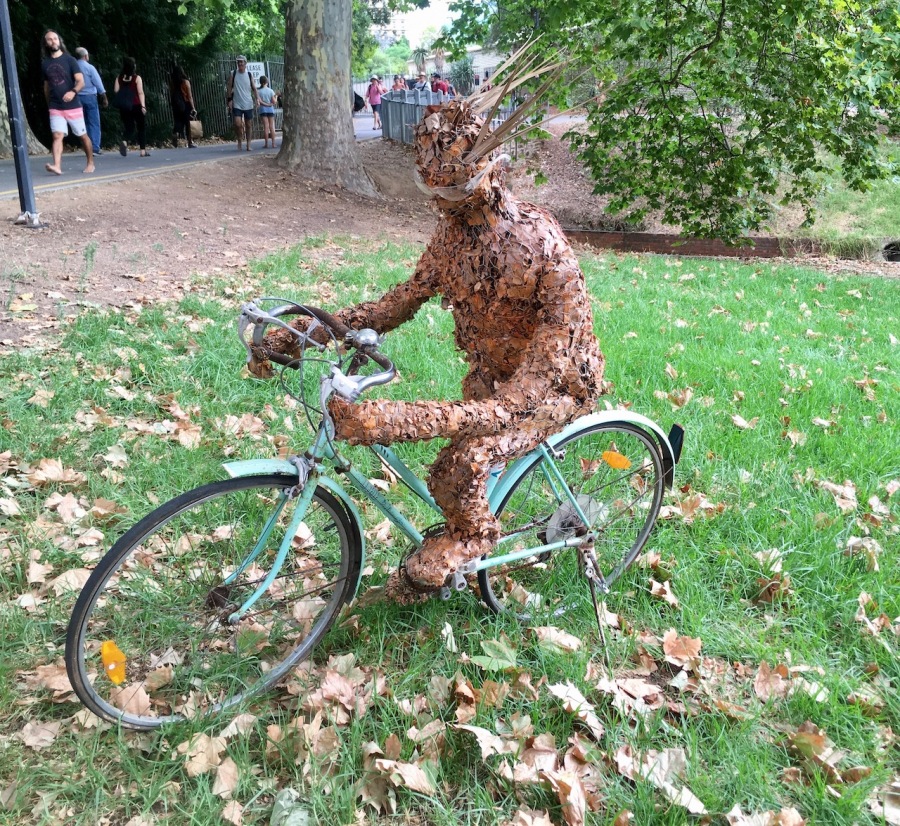 I walked amongst thousands who made the pilgrimage to the music festival, traipsing around the parkland gardens like the faithful seeking redemption. Bodies enveloped in sound waves vibrating through the air lolled on the cool grass beneath river red gums, Moreton figs and pencil pines. Reality receded fast amongst the tie die, giant dancing puppets, and the thin trail of weed smoke that wended through the crowd to a melody so sweet it tasted like fairy floss, enfolding me in clouds of saintly bliss.

Wandering around the grounds to soak up the atmosphere, I noticed sculptures fashioned from chicken wire into the shape of people. They were stuffed with old brown autumn leaves imitating skin after too much exposure to the sun. The figurines were scattered through the gardens like aberrant seeds. Someone’s idea of art, frozen in ghoulish stances, sitting in chairs, leaning on walls or spilling from the hollows of trees. Faceless creatures in poses of waiting materialised at every turn, and I had a creepy inkling they were watching me.

On the second day I swore the leaf people had moved around the park overnight. The one playing a piano in a gully the day before had disappeared, and another riding a bicycle had cropped up alongside a path. When I mentioned this to my girlfriend she suggested I had been drinking too much.

At dusk we sprawled on the grass to listen to the tones of a throat singer and animal sounds emanate from a wind instrument. The musicians cries were answered by wildlife deep in the darkening woods. At one point I thought I heard a human scream, but when I scrambled to my elbows all eyes around me faced forward to the stage. After the throat singer melted into the forest an aboriginal women’s choir dressed in colours of the desert emerged on stage and started to croon. Their haunting voices echoed through the night competing with the owls that dwelled in the high branches.

My bladder started to fill to bursting so I clambered to my feet and headed toward the portaloos down the back in the dark. I passed through a stand of pines and couldn’t tell whether the rustling of foliage was coming from beneath my own feet or others walking in the darkness out of sight. The ghouls in my head took shape in the night around me when I caught a glimpse of movement. I hurried on, my heart racing.

Fortunately the dunny queue was short. The bathroom experience is the worst part about festivals. No matter how often the tireless staff mop out the stalls, at the end of a hot day the smell of urine is still nauseating. My disgust for the stinky box cubicle with its invisible splashes sprayed around the walls was overridden by the relief of emptying my bladder.

When I stepped back out of the loo, I was alone with the chorus of the night. Already a bit spooked, I started to walk stealthily in the direction of the haunting melody that filtered through the bush. The darkness deepened. An obstacle at my feet caused me to trip and land sprawled on the ground feeling like a fool. A low painful moan sounded nearby and I climbed to my feet peering into the dark. In the dim gloom I saw a figure lying prone on the ground, mouth stuffed with flaking brown autumn leaves. I turned and ran through the night, adrenaline flooding my body.

Passing a large tree, something latched onto me from the darkness. When I lashed out to defend myself, the thing grabbed hold of my sleeve and tugged. A shriek escaped from deep in my chest and I swung around wildly tussling with the dark figure. It grabbed at my skin, leaves crunching underfoot as it wrestled me to the ground. My panicked mind realised that my daytime fantasy of the chicken wire and leaf people coming alive in the night was real. The prone figure I had tripped over must have been a victim, and now they had come for me.

Another scream echoed through the trees louder than the distant singing. I was fighting for my life, the sting of wire cuts on my arms. In the distance someone called my name and I yelled for help.

Torchlight beams leapt and danced through the branches. After what seemed a lifetime, a light found me then several spots converged on my face. A deathly silence fell across the night. I scrambled to my feet and wheeled around in the illumination ready to defend myself again. Peals of laughter began to fill the night around me. My attacker, one of the chicken wire and leaf sculptures, was flattened to a pulp at my feet, no signs of life having ever been in it.